So I travelled to school on Monday. When I was at the car park(I traveled by road), the person in charge of loading the luggage was acting rude and charging too much for luggage(I wonder why the hell they even charge for luggage, like who the hell made the system?!). The whole situation was just pissing me off. There was a girl that was more pissed than me there though😂, she was just shouting at the loading guy the whole time. Later some other guys were scolding her for shouting at the guy, saying that she has no respect and shit, she then shouted at those guys too😂😂😂. I know it was wrong for her to yell at the guy because he's older than her but I was so happy she did 😅cause the guy deserved it. It was as funny asf😂. At least she gave me a reason to laugh😅. The guy snubbed her the whole time until we were about to go then he got pissed and shouted back at her. The whole thing was just entertaining me I swear😂. Then we set out to UNN(where I school now). We got there in the evening time around 7pm. I thank God for journey mercies though🙏. When we arrived, we realized that the room we had already rented was bad and not worth the price we paid for it... that just messed me up totally. My whole first day vibe just died out. As if this wasn't enough, yesterday, my roomate and  I went through a lot of stress trying to find a better place to stay 'cause the place we paid for was "not habitable" per say😩.  The room's structure is poor and it's is surrounded by bushes.

Exactly how I looked when I was shown to my place😢

I won't be surprised if I sleep there and wake up with a snake next to me😅. I didn't even use any car or bike to move around the school,(they have a very confusing transport system) I trekked throughout 😫. I didn't even get a better place at the end of the day...such a messed up day.
Apart from looking for accommodation, my roommate and I went to the market and bought things for the(non habitable 😪) room. At least that's one successful thing for today😅. What my roommate kept saying to console us was that it was just a phase we were going through that it'll all get better with time. He was actually right cause I'm not feeling as pissed as I was yesterday. I remember when I was still on holiday and my friends that resumed before me in other universities were saying that school was stressful and shit. I always said that I don't care how school is and that I wanted to resume because it was boring at home then. Well now I've resumed😒, and those my friends spoke the damn truth😭. 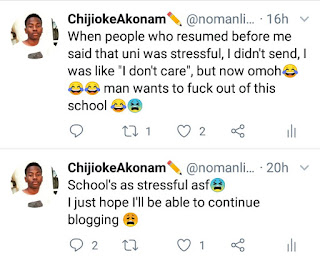 These tweets came from the bottom of my heart 😂😩

I sincerely want to get out of this entire place😅 but as the saying goes "life's not a bed of roses"( I hope I even got that saying right😂 cause I'm too stressed to think straight 😅😩). I just hope to adapt to this school's stressful system as soon as possible so that I'll put my focus on my academics ✍🏼.

Words of a stressed out Nigerian
Undergraduate 😩
✍🏼✍🏼✍🏼

Posted by ChijiokeAkonam at 07:24 2 comments:

Always think more of the positive sides to everything you do than the negative sides, it fuels success✨ 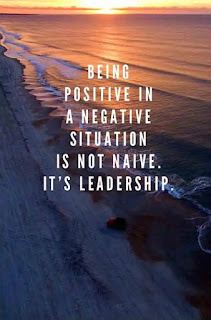 Today I was just imagining how studying medicine and surgery will be like(I mentioned that I'll be starting my medical school soon in my previous post). Some people I know portray medicine as an impossible course when I talk about it, they say it's very hard and all that but I always try not to let their opinions get to me. Once one gives into the negative opinion of someone about his/her ideas/aspirations/goals or even his/her fears of failure without thinking of the positive sides of those ideas/aspirations/goals, he/she has lost that idea/aspiration/goal and lost all the possible success that may have come out of it. Also, giving into negative thoughts and comments wastes time. Once one keeps conceiving ideas and not trying them out because of fear of failure or negative comments made on them by people, that person will keep wasting his ideas and time looking for a perfect idea which doesn't exist. Yeah, I said it, perfect ideas don't exist, there's nothing like a perfect idea(By perfect idea, I mean an idea with no possibility of failure). Everything has two sides to it. The more optimism you apply to your ideas/aspirations/goals and your life in general, the more liable you are to succeeding. So far as your ideas, aspirations or goals are honest, try them out. 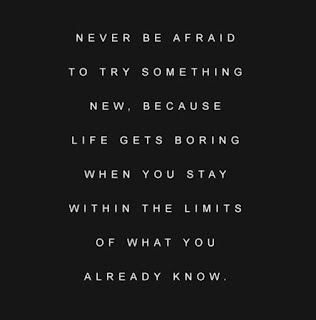 I have made up my mind to try out whatever idea comes to my mind not minding the negative comments people might make or the fear of failure that naturally comes with new ideas. As long as the idea is honest, it's worth trying. It will be good if you also use this mentality in everything you do, it'll go a long way in opening more doors of success for you.

Posted by ChijiokeAkonam at 07:46 4 comments:

Yo! My name is Chijioke Akonam. I'm 16 years old. I was born and raised in Abuja, Nigeria. I'm starting my medical studies in University of Nigeria, Nsukka in less than a week. I want to start this blog as a diary at first then with time I might settle on a particular topic/niche or a particular set of topics/niches. I'll also tell you about some of my past experiences. I'd like to make this blog as intimate as possible with all my readers throughout the world lol 'cause I know I'll eventually be known internationally for my blogging😎.

I know that I'm capable of being a successful blogger if I put my mind to it and if I'm consistent. I'll appreciate if you guys comment on each of my posts whether positive or negative as that will help me improve in my writing and also give me ideas on how to write subsequently and get better l.
It's true that there cannot be a perfect first blog post but I think that this post can pass for a modest first post😌. I'd love this blog to be as conversational and intimate as it can between you and I so if you want to know any other things about me  which I didn't mention here you can let me know in the comment box.

Email ThisBlogThis!Share to TwitterShare to FacebookShare to Pinterest
Labels: ChijiokeAkonam, How to introduce one's self, how to start a blog, how to write a first blog post, introduction, Pius Akonam, Welcome to my blog
Home
Subscribe to: Posts (Atom)